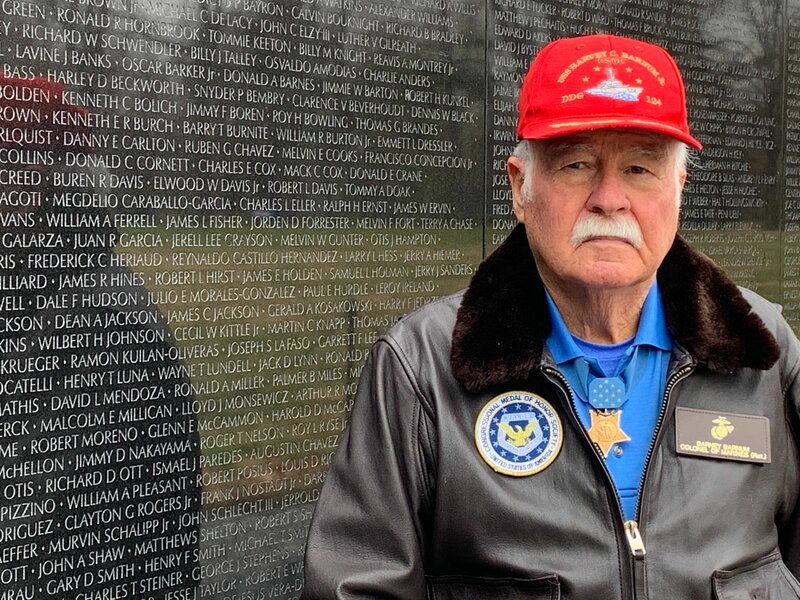 LTC Stephen F.
Posted 10 mo ago
Thank you my friend MAJ Dale E. Wilson, Ph.D. for honoring Marine Corps colonel Barney Barnum, who served two tours in Vietnam, and is a Medal of Honor awardee, stated that 'Vietnam War Veterans Day is an opportunity for Vietnam Veterans to show pride in their service. He also said the day is a chance for the public to thank Vietnam Veterans.
Vietnam War Veterans Day approaches on March 29 he stated “I think it’s a chance for Vietnam Vets to pause and reflect on who they are, what they did, what they accomplished, and to think about the guys who fought on their left and their right,” he said."

Harvey Barnum, Medal of Honor, Vietnam War
On December 18, 1965, Harvey "Barney" Barnum, Jr., took control when his unit commander was killed in Quang Tin Province, South Vietnam, directing a counterattack and a withdrawal. He was presented with the Medal of Honor on February 27, 1967, but it would take years for the fragments of that day to come together in his memory.
https://www.youtube.com/watch?v=yQ_P60AGYtg

CPT Gurinder (Gene) Rana
Posted 10 mo ago
I remember MSG Painter who served three tours in Vietnam and was my NCOIC. He shared with me many stories about his tours in Nam, which made me a much better leader. I will definitely observe Vietnam War Veterans Day on the 29 of March because these heroes deserve it.
(8)
Comment
(0)

CH (MAJ) Eric Dye
Posted 10 mo ago
Thanks for these informational stories. The last five years I have had the privilege of listening to hundreds of stories from veterans while serving at the Erie, PA VAMC. Most have been Vietnam Veterans, who are the majority of patients there. I discovered a program about 2 years ago initiated at the Madison Wisconsin VAMC called "My Life My Story" and began making a record of the service accounts of veterans receiving care at our Medical Center. As I emphasized to each veteran the accounts were not 'my account" of their story; but their account and what they want people to know about their service. Things that were private, I kept private. When finished and only after the veteran had approved the text read back to them, it was entered into their medical record, a copy was given to them and as many copies as they wanted for their families. That was a way for new staff providing care to become familiar with the personal matters that each story related about "the person" for which they were providing care. It was my privilege to hear the stories behind the stories often told to only a close friend.
(8)
Comment
(0)
Show More Comments
Read This Next
RallyPoint Home