LTC Stephen F.
2.9K
144
32
20
20
0
https://www.oann.com/border-patrol-arrests-42-migrants-while-mexico-deports-others/
Here is an update on the assault by migrants from the "caravan" on the border wall. I am not surprised that the migrants started the fight by throwing rocks.
Images: 2018-11-25 Migrant throwing a rock at border patrol.jpg


"OAN Newsroom
Updated at 11:15 AM PT – Mon. Nov. 26, 2018
Border Patrol agents say 42 migrants are under arrest after the migrant caravan attempted to force their way across the U.S. border.
San Diego Border Patrol Chief Rodney Scott confirmed the report in an interview on Monday, adding the majority of those arrested were adult males.
Scott also said agents only resorted to using tear gas to deter migrants after members began to pelt U.S. officials with rocks.
In addition to the arrests, the Mexican government is planning to deport as many as 500 migrants they say attempted to enter the U.S. violently and illegally.
Reports suggest Mexico has already deported roughly 100." 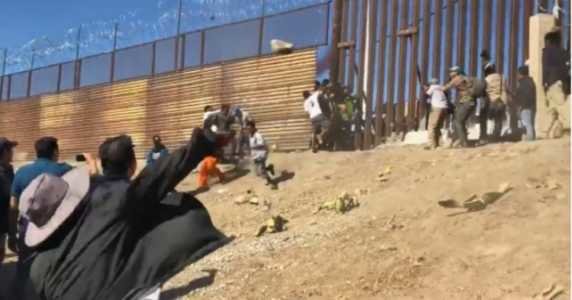 previously deported illegal alien climbed a tree to avoid being arrested by Yuma Sector Border Patrol agents. He then set the tree on fire and threw rocks at...

I don't usual make the first response to a post of my own. However I wanted to share this video of a migrant throwing rocks as they attempted to force a crossing.

Capt (Join to see)
4 y
Just a fleeting thought. I wonder what the liberal take would be if the border patrol agents threw the rocks back at the ones that threw them.
(2)
Reply
(0)

Lt Col Charlie Brown
Posted 4 y ago
Rocks are weapons. You throw rocks and you get arrested. You might get shot.
(16)
Comment
(0)

SSG(P) (Join to see)
4 y
Generally escalation of force is adhered to in this situation, but arrest is necessary. Their asylum plea should not be heard if they attack in violence. They have produced a criminal record for themselves. If they come in peace they should have their case heard.
(5)
Reply
(0)

SCPO Morris Ramsey
4 y
They are called Projectiles by those on the receiving end.
(2)
Reply
(0)

SMSgt Lawrence McCarter
4 y
PO3 Bob McCord - It is an assault with a deadly weapon when used that way, a rock can kill You !
(0)
Reply
(0)