President Trump’s track record for this election cycle is 132 successful candidate endorsements to 7, a huge success despite MSM outlets’ fake reporting. There’s speculation that Trump could make an early announcement on his 2024 presidential plans because of the current national environment. 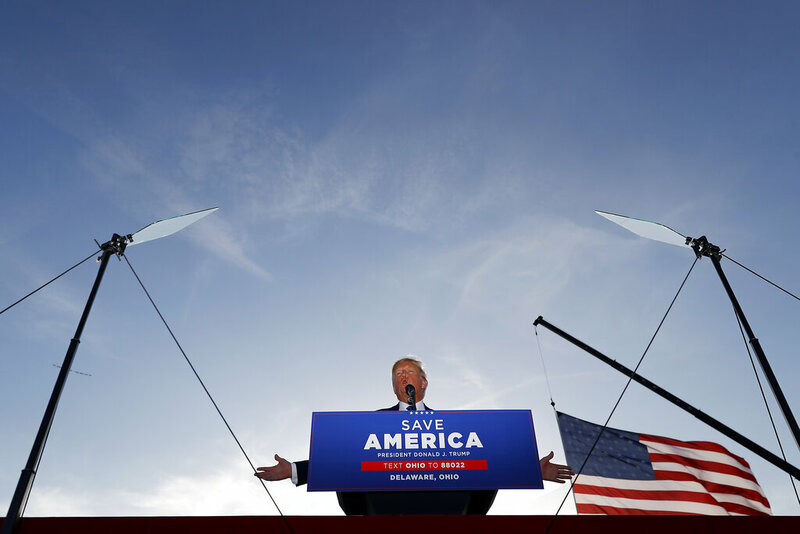 Sgt (Join to see)
Posted 5 mo ago
Trump's record is excellent thus far...on the candidates He has endorsed... Time will tell whether former President Trump will be the candidate of choice or whether it is the agenda for our Country that Trump has set up for four years following the current administration, but with a different candidate... Still too many unknowns in a complicated political confrontation... The only thing certain, in my view, is that we need to get back to the care and growth of our Country with America first and definitely not last! The disaster we are now is disemboweling the very essence of our Nation...imho!
(7)
Comment
(0)

CWO4 Terrence Clark
5 mo
Sgt (Join to see) Agreed. It is a Movement, with the man providing the energy and leadership. There are a number of scenarios being gamed, both with Trump as the primary player, and with him as driving force. The RINO herd has plenty of time to snatch defeat from the jaws of victory (cliche). In the meantime, we have to individually direct our efforts to support the movement and counter the dangerous foolishness of the Democrats (and their RINO allies) such as we have here in Pima County. Sgt (Join to see)
https://thepostmillennial.com/official-arizona-democrat-account-promotes-f-ck-the-fourth-event

"Let's Mourn with F*ck the Fourth. See you at Reid Park" was the message from the Pima County Democratic Party, which added "Bring comfortable shoes, water, lawn chairs, posters, and your anger."

MSG Roy Cheever
5 mo
I Pray America will continue to stand against Communism, Socialism, and the “World Liberal Order” (just announced by Reese, Biden Admin Representative on MSM). And continue to vote for those who would and can, “Make America Great Again”!!!!
(2)
Reply
(0) 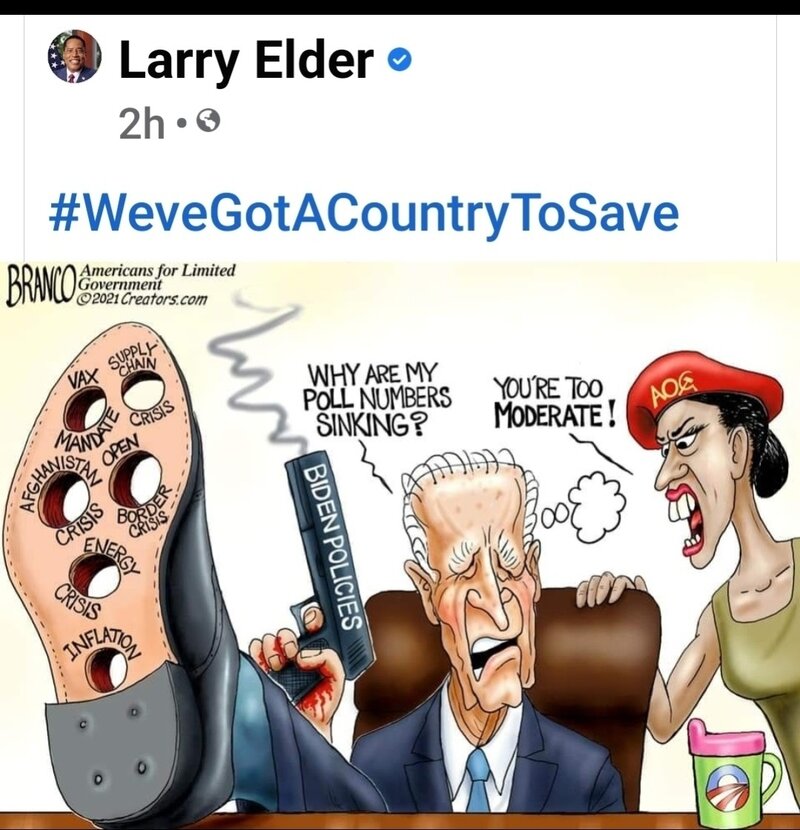 President Biden and his left of Lenin Democrats are the best salesman for the Republicans. Having high oil prices and wanting our enemies to sell us oil just is icing on the cake. We could be like my Province and actually have a 3 billion dollar plus Surplus in oil royalties. The Biden Administration ruins everything it touches. Americans lose their jobs while our enemies get money to bankroll their evil plans.
https://www.bnnbloomberg.ca/alberta-records-first-surplus-in-seven-years-on-oil-price-surge-1.1785044
Sgt (Join to see) Sgt (Join to see) CWO4 Terrence Clark

Alberta recorded its first fiscal surplus in seven years after oil and gas prices surged in the first months of the year. 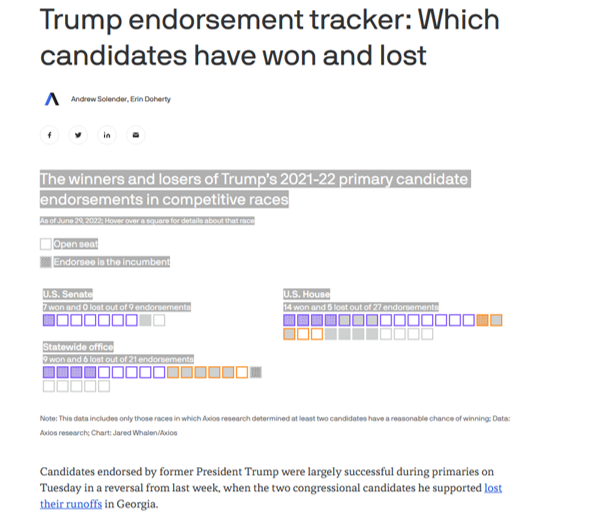 Thank you my friend Sgt (Join to see) for posting.
Overall including last year, former President Donald Trump has a total of 173 endorsements.
While his candidates did poorly in Georgia, his endorsed candidates did well in the June primaries.
I did a little research and disagree with Axios.com who eliminated unopposed candidates that he backed from the total wins. Actually, I expect his endorsement for a candidate may have caused other potential candidates to withdraw their candidacy.


This episode of The Cajun Conservative Show, Cajun breaks down the latest election news and how Trump candidates are winning and the democrats are worried, also why people are voting for Trump candidates
Also Biden said it’s the oil companies faults that the gas prices are high but Cajun reveals why it’s Biden fault and how to fix the problem
Also Cajun called it, Joe Manchin had meetings with Chuck Schumer on a need Build Back Better plan that will hurt America more then help"
https://rumble.com/v192pc1-why-trump-endorse-candidates-are-winning.html

Background from {[Axios.com/2022/06/01/trump-endorsement-tracker-midterms]
Candidates endorsed by former President Trump were largely successful during primaries on Tuesday in a reversal from last week, when the two congressional candidates he supported lost their runoffs in Georgia.

Why it matters: A string of losses among candidates endorsed by Trump in May has punctured perceptions of his dominance over the GOP for the first time in years, raising questions about the competition he could face in a 2024 Republican presidential primary.

The latest: Trump backed a number of safe incumbents ahead of Tuesday's primaries, including Rep. Lauren Boebert (R-Colo.), who won with 65% of the vote.

Tuesday's primary marked Boebert's first challenge after her surprise win in 2020 and served as a test of whether voters in the rural district wanted to keep the controversial firebrand in office, Axios' Alayna Alvarez reports.
Trump-backed Rep. Mary Miller (R-Ill.) faced a tougher test against fellow House Rep. Rodney Davis, who voted to certify President Joe Biden's electoral victory, leading Miller to label him a "RINO," (Republican in name only).
Miller's victory — she won with 57% of the vote — demonstrates the power of Trump's endorsement, even for a controversial candidate without strong local party backing, Axios' Monica Eng reports.
In Utah, Trump-backed Republican Sen. Mike Lee fended off his GOP challengers, despite text messages he exchanged with former White House Chief of Staff Mark Meadows outlining tactics to challenge the results of the 2020 presidential election were revealed.

The big picture: An Axios analysis of Trump's 173 endorsements found his record — while still positive overall — is far weaker when candidates running unopposed or in non-competitive races are filtered out.
Seven candidates endorsed by Trump were defeated in GOP primaries last month, including four high-profile challengers in Georgia who were crushed by incumbents.
11 of his candidates in competitive races have lost so far, while 30 have won.
Another 16 competitive races are still in progress.
Editor's note: This tracker will be updated throughout the primaries.

Why Trump Endorse Candidates Are Winning?

This episode of The Cajun Conservative Show, Cajun breaks down the latest election news and how Trump candidates are winning and the democrats are worried, also why people are voting for Trump candida

In this replay of an important interview, Father Frank will be interviewing Kari Lake, a Trump endorsed candidate for Arizona Governor. @RSBNetwork #MAGA #Elections2022 Praying for America for July 5t